When I finished my site and uploaded it I’ve been so glad i managed it. But still I haven’t been satisfied with that. The code was a mess and the site performance was quite awfull. But back that time I had no knowledge of CSS coding or alternatives.

Actually I’m not someone who starts something from zero, reading tutorials and how-to’s. I rather like to analyse content and assimilate it.  In this case I’ve been using a small tool, that converts HTML tables to CSS code. Because my HTML was a mess already, the CSS was a mess aswell like you can imagine maybe. Plenty of generated IDs were made, some were even useless. I started deleting everything I have not been in need of. Next the site had to be cleaned up.  Visually. I removed the Last.FM bar and the Score of the Month  frame to gain performance again. Aswell the side navigation bar has been replaced and minimized. Aswell from HTML rollovercode to a CSS version.

Gallery
The gallery has been completely replaced. Now you don’t have the ability to choose the four categories (Photos,Renders,Sketch and The Website itself) but using a general flash app where all albums are integrated. The new gallery supports those functions

I would lie if I tell you that i’m finally finished but I always will try to improve the site. The gallery needs to be updated aswell of course.
Any feedbacks, positive and negative are welcome.

Site Evolution
I had the idea of creating a website at 12th August 2007. Why i know that so precisely? Because that’s the oldest file I of that project if have. I first also had the intention in making a german site .

The work on that Navbar got canceled immediately. Short after that i made my logo as you can see it today on the website.Actually it’s the last graphic wich remained of all work I’ve put into that project.

As soon i had that image (back that time it was an animation aswell) i went for a black background based page with strong saturated frames for the nav bar. 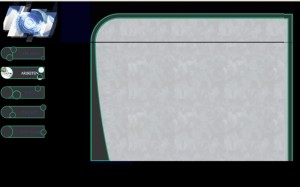 The first draft of the site

The draft still has been in english and the first time I had rollover buttons and a Shockwave video integrated. Due to lack of time the project was sitting ducks for a long time till January 2008.

Then I came up with a complete new Theme that survived till today. 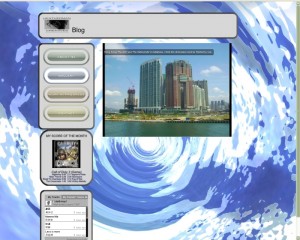 My original render of the whirl as background, grey boxes with content. Everything was clean. Some don’t like the background till today but I loved it. The first time the graphics were made in english. A blog engine has been integrated, aswell a playlist of Last.FM and a monthly “Score of the month” shockwave with music samples.
Since the code was a mess and the features were not quite friendly for the performance, I decided to renew it – and that’s what I have done. 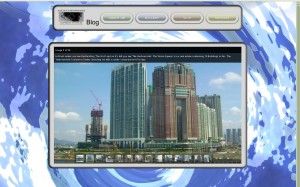 The site as you see it today

A complete new blog engine and gallery have been integrated. The main content frame is much more bigger allowing me to display bigger images or posts.

So all in all it have been nearly 4 years of work till it became the website you see today.