It’s April and typically for this month we have what we call, the april weather. That’s unsettled weather of it’s best kind. Sun, rain, wind, sun wind rain, rain, sun and so on.
When I pack up work and the weather is in my favor, I sometimes take out the big board, where the draft is nailed on, outside the garden. Recently did so and continued with the western and southern coastline including High Rock, Hammerfell, Sunset Island, Valenwood, Elsweyr, Cyrodiil and Blackmarsh. After finishing the by rivers pervaded Blackmarsh, I had to put in a break. Morrowind with Vvardenfell’s thousand of Islands will be next as well Skyrim and the rest of High Rock. Then I made it around whole Tamriel. 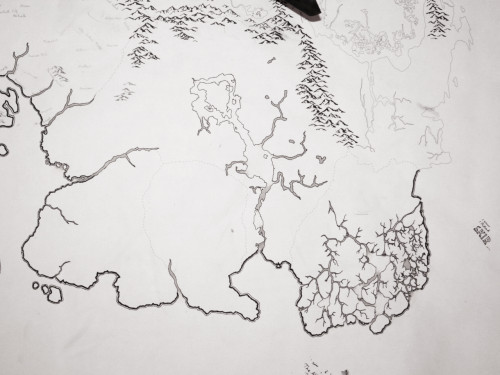 The southern provinces from left to right:
Valenwood, Elsweyr, Cyrodiil and Blackmarsh 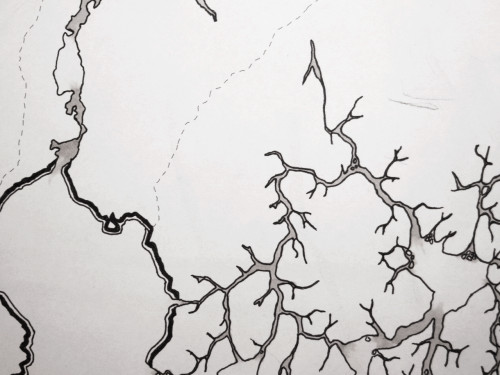 Blackmarsh rivers and deltas. This particular province took just as much time as the rest of the southern coast did.

Hey nice update on the map! what kind of ink do you use again? looks very nice ^^

thanks 😉
Right now I use a plain fineliner pen. Unfortunatelly this paper is beeing used for plotters and doesn’t work well with the fineliner. The river grading is done wtih a soft brush marker.

The map is extremely detailed and is coming along nicely. I really like it.