Recently I had an small idea to improve the appearance of my camera bag. Usually when people carry their cameras, you can recognize the brand by the carrying strap, most time titled with Canon, Nikon or Sony. Since I use Olympus and hardly carry my camera outside the bag due to it’s size and weight(when fully equipped), I’d still like to show, what kind of camera I use.

Of course it should look very unique and special and so it happened, that I’ve made my own custom badge. Planing, constructing and execution have been done within only two hours. I knew from the very beginning, what I’ve been looking for.

So after everything has been finished, I end up with this small shiny badge, ready to be mounted to my camera bag. 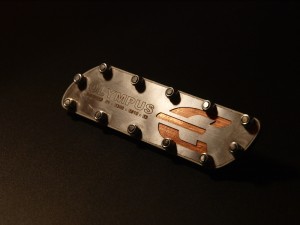 The E-Series is a camera system by Olympus that has been produced between 2003 and 2010. The Olympus E-5 is the last model of the line. I began with an E-510, released in 2007 and continued with an E3, also released that same year. 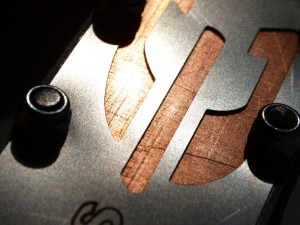 The main frame is made out of aluminium combined with a stainless steel cover. Beneath the cover is a framed piece of copper. For optical purpose, 12 inherently safe nuts have been added to the outer frame. 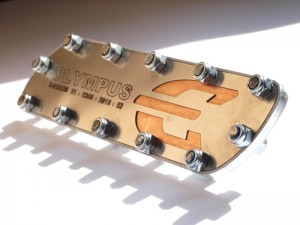