The Millennium Falcon from the Star Wars Saga is one of the most iconic space ships in sci-fi history (yes, Star Wars is space fantasy, I know)  but also my personal favorite when it comes to collecting and I  do that for passion. Of course I do not collect all of them as I stick to some criterias.

Recently I had the idea of a mash up image featuring those miniatures. What exactly I didn’t know so far. If I’d take all my models right now, I come to a number of 28 different fotos. I could extract a tab out of each image and relocate them to a mash up. In my opinion the top view would make the best perspective as it is the most recognizable one.

Well, now I just have to set up something and shoot the pics. The background will be black. If the result with 28 pictures is promising I can’t  say for sure but I’ll make an attempt for it. 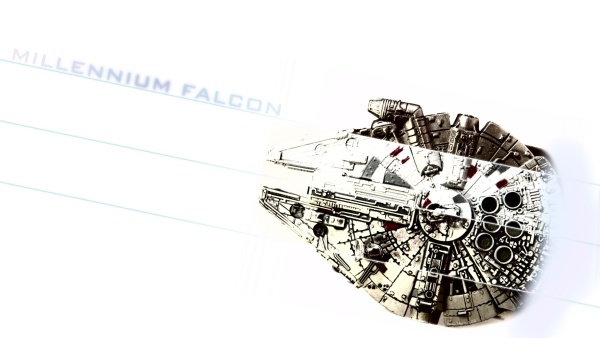 The image is featuring four miniatures. It is just a rough idea and doesn’t represent the result I like to achieve. Used models (from bottom to top) are from the tabletop game Star Wars X-Wing, the Hallmark ornament, a F-Toy version from Japan and the Rawcliffe Fine Pewter cast. The image is just a 15 Minute mash up, there hasn’t been much effort put into – like I said, it’s just a test.